Fans of the classic Amiga game Pinball Dreams will probably be interested in getting a copy of Cowboy Rodeo’s remake of the title for the iPod Touch. That is, of course, until they see the $5.99 price tag, which I personally think is too much. I mean, I’d gladly pay that for a developer who took the time to dream up a concept and design a game but not for what is essentially a port of a 1992 game into a new platform.

Like the original, Pinball Dreaming: Pinball Dreams for the iPod Touch features four playing tables, each with its own theme. Each one (Ignition, Steel Wheel, Beat Box and Nightmare) is laid out exactly like the original, with the same detailed 2D bitmaps, shaded to resemble a 3D rendering. Sound effects and music are also exactly the same. 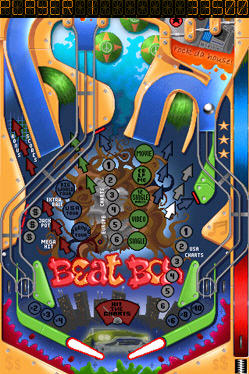 According to the developers, they ported the exact same Amiga source code into the new game line by line. Of course, this new version features touch support: tapping the well fires the ball, a similar tap activates the paddles, a nudge shakes the table a bit and tilting the iPod Touch hoists your table to one side.

While enjoyable (in an outdated kind of way), there’s simply too many pinball games for ipod touch that just play better, with more stunning visuals and newer challenges. For old fans of the game, this could be a worthy purchase for nostalgia’s sake. For others, though, this should be $0.99 cent alternative to better games in the App Store. Well, if you do not want to buy the games, you could try hundred free games for ipod touch, so you could save your money to the bank.