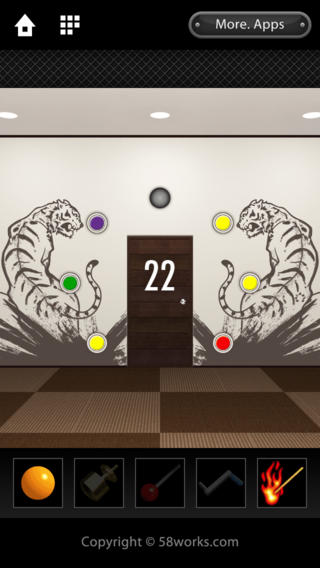 Dooors Room Escape Game is a game for the ipad, iPod Touch and iPhone devices that has recently shot to fame in the iTunes app store. DOOORS is a game in which you will have to solve many puzzles and use your brain. The idea of the game is that you have to escape from the doors through the doors. However, escaping is not as easy as you might think and you will have to solve a number of different puzzles and use a number of different methods to escape the rooms.

Dooors Room Escape Game has a total of 35 stages in which you will have to escape and the way that you will solve the puzzles are different on each one. The graphics of the game are very nice and straightforward making them easy to understand too. There are a lot of different features of the iPhone and iPod Touch that this game makes use of including the tilt feature and the shake feature. One of the great features of the game is that there is the auto save option which will mean that you never lose your place after doing a stage.

The Dooors Room Escape Game also has a number of mini escape games which will be great if you are just looking to kill some time on your iPod Touch. This app is not available on the iPhone 3G or older and will require iOS 4.3 or above in order to function.

You can download Dooors Room Escape Game for iphone, ipad and ipod touch from the iTunes app store here: http://itunes.apple.com/us/app/dooors-room-escape-game/id490611105?mt=8

The Best Free Games for iPad