Derived from the first stage of the PC game, Spore Origins game for the iPod Touch tasks you with the responsibility of taking care of a microscopic spore in a tide pool with the ability to evolve as a more developed creature. The game’s premise is survival of the fittest in an environment where your spore attacks and eats other organisms (which improves health and increases your DNA meter) while trying to avoid ending up as nutrition for superior ones.

The spore origins game for ipod touch is displayed in landscape mode to allow for a wide vertical plane. Controls consist of tilting your iPod Touch to move your spore around the protoplasmic ooze. You finish each of the 18 sections by consuming the required amounts of DNA material from other life forms. 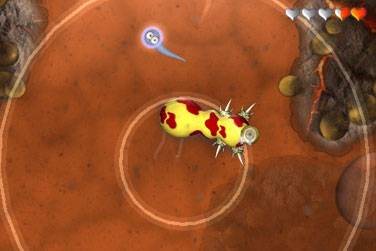 Every three levels that you finish allows you to cash in your earned evolution points. You are taken to a creature editor where you can fit your spore with a corresponding upgrade. Each upgrade will belong to one of four categories, namely perception, attack, defense, and movement. You better choose wisely because your upgrade can determine a lot of how your spore eventually fares. As the game progresses, your character advances from being a marginalized organism to appearing as one of the most feared creatures on its environment, gobbling monsters that struck it with fear only a few minutes ago.

Overall, a game of Spore Origins on the iPod Touch should last roughly an hour. While it’s no substitute for the actual PC title, it’s a nice diversion and a fitting introduction to one of the most creative games ever devised. It’s currently available from the App Store for $8.