Home » Angry Birds is most popular Ipod, iPad and iPhone Game App according to figures

Angry Birds is most popular Ipod, iPad and iPhone Game App according to figures 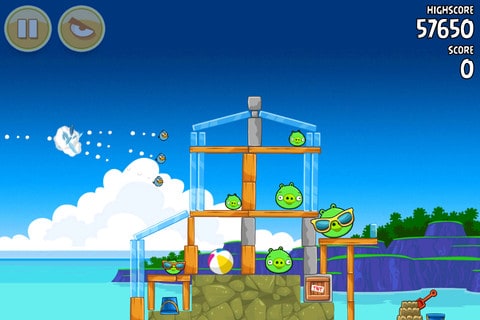 Angry Birds is a game that will no doubt have been played by almost everyone that has a ipod touch, ipad or iphone and even if you don’t have them, chances are that you will have heard of the game. Now, according to figures, Angry Birds is the most popular game app ever across a range of devices after releasing multiple versions of the game throughout the year on the iPhone, Android and other platforms.

Angry Birds has become so well known that it has even had partnerships with the Rio film. The game is currently said to be the most purchased game of the year in the Apple app store and it is thought to be a similar story in the Android Marketplace. There have been a number of Angry Birds games including the original as well as Angry Birds Seasons and Angry Birds Rio. Both of these other spin off games have also been featured in the top 10 iTunes charts.

When it comes to free ipod touch applications however, Facebook was the game that managed to top the charts in the iTunes app store and many others as users download the app to use the social network on their Smartphone devices. Twitter, Skype and eBay were also high up in the list of the most downloaded free apps of the year. BBC’s iPlayer was the top of the free download chart for the iPad in the UK too.

Here are some videos which will show you how popular this game:
+ Original Angry Birds from Rovio

Angry Birds is the most popular game of all time for the iPhone & iPod Touch. Everybody and their mother has came to love Angry Birds from Rovio. One of the best iPhone/iPad games ever!!

The concept of Bad Piggies is cutting-edge and very clever and the music makes you smile. The Angry Birds-developers once again created a really good physik-puzzle-game that really shines out of all the usual games. Gamers who like Angry Birds should really take a look at Bad Piggies.

rosari
« Used iPod Nano – Is It Worth It To Buy?
iPod Headed for The Grave! »

Cave Bowling for the iPhone is an app that is not that new to the app store but has previously not been free. Now,...
amazinjosh
Aug 31, 2019 51 sec read