In response to the increased interest shown by users to create games for iPad tablet and iPhone, Apple is preparing to launch a dedicated gamepad, designed to give them a better way to interact with their favorite games. 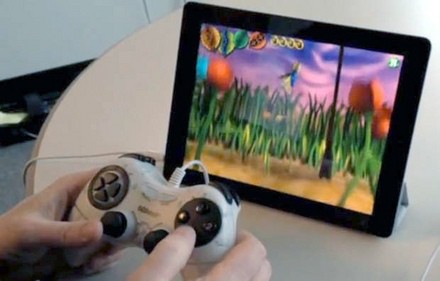 Even if such an enhancement was not officially confirmed, the rumor is quite credible, given that Google has added more than a year in gaming accessories with Android Honeycomb. Meanwhile the supply of games has grown since then to include names like Grant Theft Auto 3 – a game too advanced to be mastered only with touch screen and motion sensors incorporated into the Apple tablet.

In conclusion, it becomes increasingly clear that Apple wants to make iPad tablet a genuine game console, able to capture the attention of the most devoted lovers of gaming console. True, the game offer is still limited, but the hardware is already there and game producers are willing to operate it and they won’t wait too wait. Furthermore, Epic Games has already pulled the alarm key holders console gaming platforms, urging efforts to incorporating the most advanced technology possible in the next generation of consoles, all hoping to secure an advantage as large in the field of competition coming from tablets.

Currently, technical capabilities provided by the current generation of tablet with Android or iOS are approaching threatening of consoles and games able to capitalize on them will appear very soon. Therefore, if is not taken any urgent action forward by some new standards of quality, the console games market will be eventually suffocated by the tablet game.