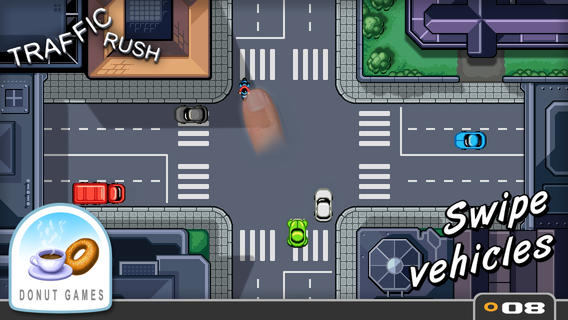 The premise is simple, traffic rushes through the intersection with no stop signs and no traffic lights. Your job it to keep the cars and motorcycles from crashing into each other.

The graphics of the Traffic Rush game are top down, and are reminiscent of a much cleaner looking Grand Theft Auto II. The graphics are cute, the attention to detail is amazing, as the buildings and cars look like they were put together pixel by pixel. This creates an art style that is enjoyable and good looking, something that is sometimes lacking in the App Store today with some of the free iphone games.

Traffic Rush iPhone game is only available for free for a limited time, so make sure you grab your copy as soon as you can. Traffic Rush has been featured by Apple in the category of “What we’re playing” and also was in the Top 100 Games for the month of August 2009. I think the number one spot in Free games will push Traffic Rush into the top ten (and maybe top five) for the month of December.

Traffic Rush’s ratings are a bit deceiving, with more than 200,000 reviews, most of them are 4 or 5 star, and everything else is in between. However, you have to remember that there are an even amount of people who love or hate the game, so test it out for yourself especially while it is free. Apps with this many reviews are hard to judge, because people jump on bandwagons and give shady reviews for games that simply aren’t their taste. So be careful out there traffic officer, and save these motorists from themselves!