Issues about race have been raised many a time, but this is probably one of the first times that an app has encountered problems regarding race. The usual app problems and issues would be freezing and crashing, most likely not as profound as political issues, nor gender; however, the app Jew or Not Jew app seemed to push the limits of apps and dealt with the sensitive issue of race.

As expected, a lot of people got disturbed. In France, the app has already been pulled out. We could trace down the sensitivity of France regarding this issue, with their history. During the Second World War, almost forty thousand Jews were deported from France, and out of the forty thousand, only a  mere three thousand survived. This has left a deep scar on each French’s heart. Leading the action against the said racist app was the SOS Racisme, together with the group, CRIF. SOS is an anti-racism group in France, while the CRIF is a Jewish group also from France.

The Jew Or Not Jew App

How does this app work anyway? Basically it shows the user different pictures of famous personalities like celebrities, and ask the user whether or not he could determine if that particular celebrity is a Jew or not. The developer argues that this app is only for recreational purposes. The developer is Jewish himself. He claims that there is really nothing wrong with guessing whether a person is a Jew or not. Besides, Google searches about the race of celebrities are very common.  Furthermore, the app wouldn’t be too noticeable if it weren’t one of the most downloaded app the past download survey. 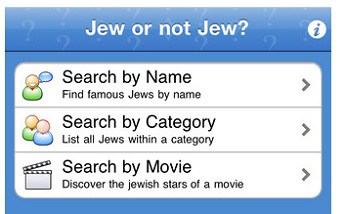 The different organizations against the app would not buy this alibi though. For them, the app is not only outrageous, but illegal as well. France has a certain law that prohibits stocking of very personal information about other people. These personal information are defined as race, s3xuality, political beliefs, and religious affiliations. Learning these sensitive info about other people could lead you to prison for up to five years, and fine up to 300,000 euros.

To prevent further issues, iTunes just decided to pull out the app entirely from the app store. Meanwhile, it’s still available for download outside France at $1.99.

Aside from this app, other apps are also deemed racist. One app is the ABC app called “Spicks and Specks” wherein the term “spicks” is in question. Like what happened to the Jew Or Not Jew app, this app has been banned as well, but it is still on going trial whether it would be safe to let other countries download it. With that, it is also the same with the Jew Or Not Jew app that wasn’t really banned from iTunes permanently but from France only. Finally, another similarity is that this ABC app also got a high ranking from downloaded apps. For racist apps to be banned, do they have to achieve a certain number of users? Just a thought.