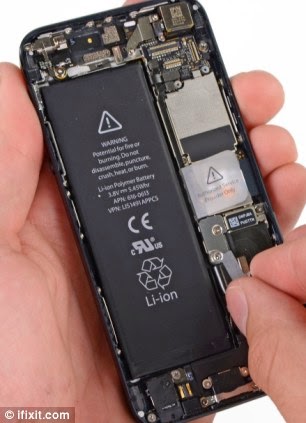 iPhone 5s Battery Drains Fast After iOS 7.1 Update – Apple has long been known to provide high quality services and products like iPhones and iPads that are engineered and equipped with powerful software packages. Just recently, the company had released the 7.1 iOS update that aims to deliver more useful features to their customers that include a newly designed user interface, accessibility modifications, and security resolutions. However, this update is gaining infamy in the social media due to users posting that iPhone 5s battery draining faster after its installation.

This iPhone batterry drain problem is getting so much attention since more users are sending their complaints by the day.  According to user complaints, their iPhone 5s battery drains fast after they have updated to the new iOS. One user have reported that before the upgrade, her phone usually lasts for 24 hours even with moderate to heavy use but after she had updated her iPhone it now only lasts for half a day.

Another person reported the same thing adding that he’s been using his phone for more than 3 months with extreme care and did not experience any problem until recently when he updated to the new 7.1 iOS.

Some reports are worse indicating that their iphone battery is draining to less than half of its full capacity within just an hour of heavy use at a very low brightness level and is losing around 6 percent of its power every few hours on standby. Another person posted “My iPhone 5S battery drain faster than usual, and charge longer.”

Apple has not yet officially announced that upgrading to the iOS 7.1could result to an iPhone 5s battery drain issue but the sheer number of people reporting in Apple forums and social networking sites like Twitter are enough to get people to be skeptical about the new iOS.

Although Apple hasn’t said anything yet, there are a few things that iPhone and iPad users can do to alleviate this problem. Experts say that battery issues are not uncommon especially during the first week preceding an update. Everytime an iOS device is updated the data that calibrates its battery’s capacity is deleted. This seemingly makes the device discharge faster than usual and this is most likely the case for those people complaining in iPhone forums. A series of charging and discharging could in time fix an iPhone 5s battery draining fast.

However, people who cannot wait for their devices to recover and recalibrate the lost battery data can do a few techniques to instantly fix this problem.

Resetting the iphone device can supposedly do the fix. This can be done in two ways; a soft reset that erases only the settings or a hard reset that deletes everything from settings to user data. It is important to do a backup before resetting a device to save any important information. Another technique to fix this iPhone 5s battery drain problem is to do a re-installation of the iOS 7.1 with the help of iTunes. Several users claim that reinstalling by means of the iOS 7.1 full package that can be downloaded from iTunes may get rid of this battery issue. Take note that this is a complex method that requires extra steps and is not recommended for beginners. In addition to these techniques, checking for software issues could also help.

READ  How to Play Pokemon Go on iPhone or iPad

You also could check this webpage to get the full solution to fix this iphone 5s battery draining faster problem if the solution above is not work to you..

If all of these don’t work to fix your iPhone 5s Battery Drains Fast After iOS 7.1 Update problem, then the best step would be to wait for Apple’s own solution for this battery bug or go to a nearby Apple store. With many years of hardware and software engineering experience, Apple is sure to release an official iOS 7.1 battery bug fix sooner or later.

rosari
« How Do You Fix a Wet iPod?
iPod Sound Check Utility – How Does it Work? »

By now, you should know Facebook 3.0 for iPhone is out and it’s available for download from App Store. The 3.0 version already bundles...
iPhone Apps
Mar 19, 2020 56 sec read

What Does it Mean When Your iPhone Screen Turns…

Problems with iPhone applications closing abruptly.  One of my best friends really love with his new iPhone. He always play many games applications in...
rosari
Sep 26, 2019 32 sec read