The Apple iPhone has one of the best cameras on a Smartphone on the market today and a lot of users actually use a variety of apps in order to be able to share the photos that they have taken with their phone. One of the most popular apps for the iPhone when it comes to photo sharing is the Flickr app. Flickr has this week issued an update for their app that features a tweaked user interface allowing users to upload multiple photos a lot easier than before.

The Flickr app update brings a tweaked user interface when it comes to uploading and picking photos. Now, the Flickr app actually shows thumbnails of all the photos that you are about to upload the to Flickr website. This allows users to be able to see what photos will actually be uploaded in a much neater way than before. As well as this, it allows users to swipe on the screen to view other photos that they might have on their phone or to tap on an image to see a larger version.

READ:   Your Favorite TV Stations Have Their own IPhone App

There has currently been no Flickr update issued for the iPad version of the app although it is expected that this will be issued over the next few weeks. It is expected that the update on the iPhone will make the app much more user friendly and increase its usage amongst Flickr users. 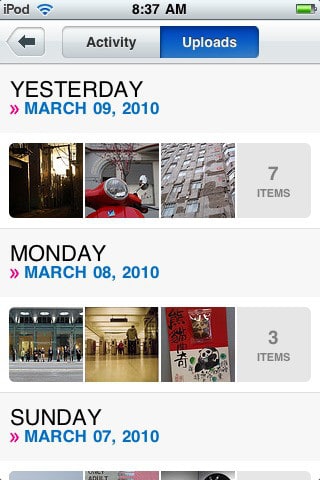 More details on Flickr APp for iphone and ipod touch:

Share your photos. Watch the world. Flickr® for the iPhone enables photo-sharing on the go – from your phone, to the world.

Shoot, upload and share photos & videos: Geo-tag your photos or add them to a set. View your photos by set and tag.

Stay up to date: See recent photo activities from your friends and family. Search and view photos by contact. Make comments or mark them as favorites.

Explore the world: Search photos & videos from the Flickr community all over the world – by subject, people, or places.

Trouble Logging in? Other problems, suggestions, or feedback for future versions? We’re here to help! Visit the ‘Support’ link or http://flickr.com/help/forum