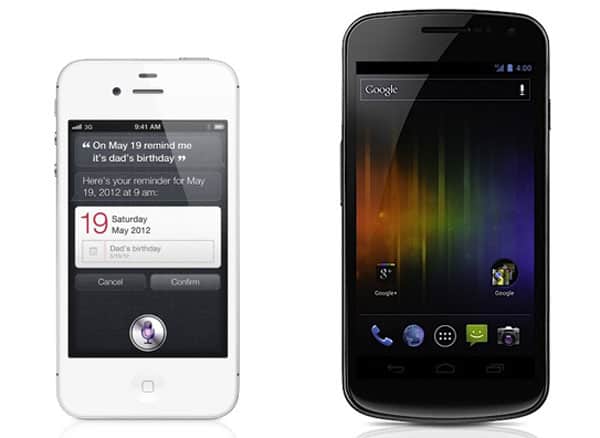 The last part of this year was marked by the launch of new top smartphones, the last on the list being Galaxy Nexus developed by Google and produced by the partners from Samsung. Moreover, the South Korean manufacturer has shown during this period that is the most formidable rival for the iPhone 4S, which sees its supremacy threatened in this segment.

While are targeting the similar audience, iPhone 4S and Galaxy Nexus are two very different phones, especially when it comes to display size, which recalls the struggle between little David and the giant Goliath.

READ:   The iPhone 4S Assistant: Artificial Intelligence for the masses?

Apple has earned the reputation for design of iPhone models, and iPhone 4S is not an exception from the rule and kept the clean design implemented on the iPhone 4. Also the back is from glass that enhances the elegance in the expense of integrity. Instead, Samsung Galaxy Nexus is made of plastic, but has a premium look and the rear housing has a grip that helps you to keep it better in the hand when you are talking.

Due to the giant display of 4.65″ Galaxy Nexus is with 2 cm longer than the iPhone 4S. This, however, did not affect its weight, since Google phone has only 135 grams, compared with 140 grams of his rival.

The biggest difference between the two phones is the screen. iPhone 4S enjoy of a Retina Display screen with the diagonal of 3.5″ and a resolution of 640×960 pixels, while Galaxy Nexus relies on a giant of 4.65″ that has two top characteristics: the screen is SuperAMOLED and is the first that is offering HD resolution on a smartphone: 720×1280 pixels.

At the level of technical facilities, Galaxy Nexus also has a slight advantage over the iPhone 4S almost in all the chapters. The processor is dual-core and has a frequency of 1.2 GHz, while iPhone 4S has a processor of 1 GHz. The difference is even greater on RAM memory: 1 GB vs. 512 MB in favor of Galaxy Nexus.

Both phones are available in versions of 16 GB and 32 GB of internal memory, but iPhone 4S comes with a version of 64GB. None of the phones has microSD card slot.