How to Fix iPhone Restarting Itself Continuously – AppleRepo.com, Is it possible to fix the restarting of the phone continuously? Even though there were no problems before, such as falling, slamming, or being hit by water splashes, it’s possible that if that happens it will cause bigger problems, such as broken screens, and even not being able to turn on at all.

I wonder why it can be like that, which is normally used, but suddenly restarts itself continuously. You have to stay calm because we will try to solve this problem on their own. 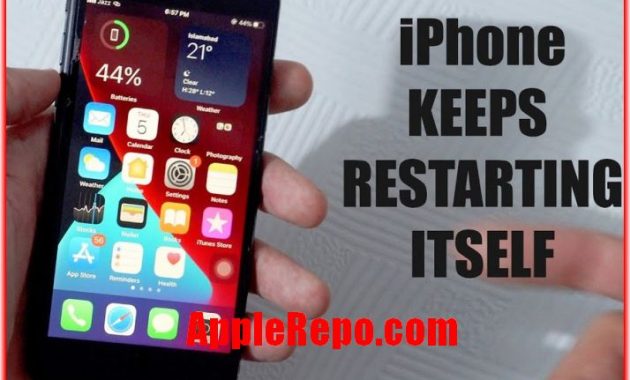 Before discussing how the solution is when the iPhone restarts itself continuously, or when it is charging. the following are the main problems that cause your iPhone to restart frequently.

READ:   How to Use Siri on the iPhone

There are 2 possible reasons Why Does iPhone Keep Restarting, namely the first possibility that there is a problem with the operating system (OS) where the IOS installed on the iPhone crashes or there are system files that cannot be opened or are missing.

The second possibility is that there is a problem with the hardware, in an iPhone system that can work properly it must be supported by normal hardware. This hardware is very much in the iPhone machine, its components are grouped according to their function. So if there is a problem or damage to one of the hardware it will definitely have a bad impact on the operating system that cannot perform properly.

How to fix an iPhone restarting itself

Before you try to repair to an iPhone service center, it’s a good idea to back up information and all data on the device first by following the article on how to backup iPhone data. But this is actually just a choice of options, if you think the data is not too important and it doesn’t matter if the data is also lost then just ignore this method. But before going to the service, it’s a good idea to follow these steps, who knows, the problem can be solved.

READ:   Setting Up Airprint on iPhone

If the iPhone, which often restarts itself, can still access the settings menu, it’s a good idea to try to update the operating system. If the IOS used is still an old version, please update and update it because usually there will be some fixes (bug fixed) in every operating system update.

How to check your latest iOS or not is easy enough, go to the Settings menu then select General and select Update software. If a message appears that there is the latest iOS software, then update it immediately by selecting the “download and install” option and wait for it to finish.

READ:   Why Does My iPhone Keep Restarting

If your iPhone has had problems recently and it hasn’t dropped or anything else, then you can try deleting some of the latest apps that you installed. It’s also possible that some of the latest applications do not match the operating system and cause the iPhone to restart itself frequently.

If indeed the problem is due to software that causes the iPhone to restart itself frequently, then the most accurate way is to use the iTunes application on a Windows computer or laptop. With the help of iTunes, you can erase and reload your iPhone, so that all the old data is lost and it’s like new again.