Doodleboy iPhone Game Review. Have you ever had that amusement park fantasy that seemed to always be ruined by the ravenous zombies that want nothing more than to eat you? Well, if you have, then it would be a perfect time to use all that combat and firearms training that your father gave you, long before he went out to get cigarettes and never returned.

And if you are fond of playing iOS games, Doodleboy – The Violence Park is the one for you!
Doodleboy – The Violence Park iphone game is a clever shooting game for iphone, ipod touch and ipad that lets you side scroll as you fire your way through enormous hordes of zombie enemies. You get to improve your skills and capabilities in handling various weapons as you progress through the game. You also have the prerogative to take your break on a carousel ride.

What’s this Doodleboy iPhone Game All About?
This iPhone game is basic gaming. Your moves just consist of rights and lefts with a few buttons on the screen, firing weapons, and using magic spells as well. By the end of the stage, you get to use your accumulated funds for upgrades, additional magic, and hiring a killer to accompany you and assist you in your battles. You can either fire your weapon, swing a manual weapon, or activate your mana for spells. At the top of the screen, you will find a button that enables you to change your weapons of choice. But watch your ammo level carefully. You can’t shoot with an empty weapon, you know. This shooting game also features one killer that you could add to your character. 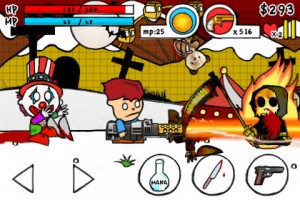 Doodleboy – The Violence Park is fun even if it is quite standard and basic. You do get lots of fun shooting an array of enemies in one area. You get to splatter zombies all throughout the game. Just as with innovative shoot-the-zombie games, this one has gore and lots of blood as well, which add up to the overall appeal. The sound effects and the music also contribute to the whole package.

But you really have to take time and figure out what the spell you’re going to use because you won’t know what the corresponding icon really means.

The highlight of the game is that you could very well customize your character’s facial features with your own face. But it doesn’t pan out as well as you would initially expect. Trial and error is the key so just keep on snapping a picture of yourself until you get it right.
Doodleboy – The Violence Park is really a perfect game for those who want the standard thing in shooting games. And it is really cool to have your own face on the character you play.