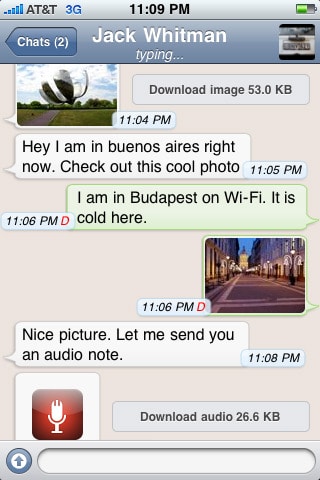 The messenger is quite easy and hassle free to setup and extremely user-friendly. You just need to download the application from your iPhone and then install it. It wouldn’t take more than five minutes. The next few baby steps would be to launch the application with your account settings and just follow the on screen instructions and ‘Wallach’ you have your messenger ready to use! The application then sends you a confirmation code via SMS and then once confirmed you can access your own whatsapp messenger app for iPhone account. The application helps out at the start, providing the new comers with updates and information about friends and acquaintances that already have the messenger on their smartphones. All you need to do to get started and to get ‘busy’ with your messenger is to send an invitation to the listed few. Once the invite would be accepted by them, you would be free to share updates, news, links, photos and videos other than chatting and texting.

READ:   RecognizeMe: You Better Not Pout In Front Of Your iPhone

Apple has a knack for constantly upgrading its softwares, applications and appearances. Hence the Apple whatsapp messenger on iPhone is also subjected to upgrading treatment. As there had been some complains about the network detection problems, hence that has been modified. This new improved Whatsapp messenger allows you to also cancel media uploads and other entries. The newer version has a number of sleek features with all the previous glitches being exterminated. It has better Wi-Fi network and hotspot connections. It provides a faster detection even when the device is plugged onto the internet. It also has a better GPS locater. For those who have a restricted or rather limited data storage for them an elaborate and illustrative network data usage statistics and a detailed status report of the system under the present settings. This allows also the wallpaper rotation fix for the operating systems 3.1.3. Sometimes the messengers reject old numbers as there is continuous streaming of new ones. But this Whatsapp messenger iPhone app allows for recognizing old numbers allowing them to sign up.

If customer reviews are anything to go by, then the new improved whatsapp messenger on iPhone is becoming quite popular. Due to its sheer flexibility and its understanding over its user’s, its user friendly setup and infrastructure it’s become quite a rage among smartphone users all over the world. It has become one of those ‘must have’ appearances in your smartphone. People who have used other iPhone to iPhone appearances thump their fists in approval of the fact that this messenger is far superior to its predecessors and its competitors. It’s being regarded the best up till now.