Apple had taken the portable music player market by storm by the launch of the wonder gadget iPod. But some time later Microsoft an equally bidg MNC launched its portable music Player by the name of Zune. Zune had some capability and gave Apple’s iPod some competition in the beginning but later sales went down.
Now there is one common question that arises in every mind, when an individual goes to purchase a portable player. And he we will try to solve the problem by comparing Microsoft’s Zune and Apple’s iPod.
Let us take up some points, which will prove ones superiority over the other –

• Screen Size – For people who don’t know the iPod classic has a 2.5” screen while Zune new and equal variant has a 3” screen. But what people don’t know is that both offer the same resolution. The Zune though has a bigger screen but has the same resolution. The low pixel density of Zune means that it will have a low resolution. So the decision is open to the house as to which offers a better screen.
• Dimensions – Though both of them look alike but the Zune is longer and thicker as well as heavier. The iPod is slim and the looks are very trendy.
• Wide Aspect Ratio – Both the iPod and Zune don’t have the wide aspect ratio. So movies in that format have to be stretched into the 4:3 for viewing on the iPod as well as the Zune. Now both have the same resolution screen so when the movie is stretched it obviously is better to view it on the iPod.
• Wireless Connectivity – One advantage that the Zune has, is its wireless connectivity. The Zune also has an inbuilt tuner, which means that one ca listen to their favorite FM stations while traveling. But the disadvantage of that is that it eats up the battery totally. Apart from that in wireless connectivity to transfer and access files are equally good in both the devices.

READ:   What's the First Thing to Do After Buying an iPod Touch? 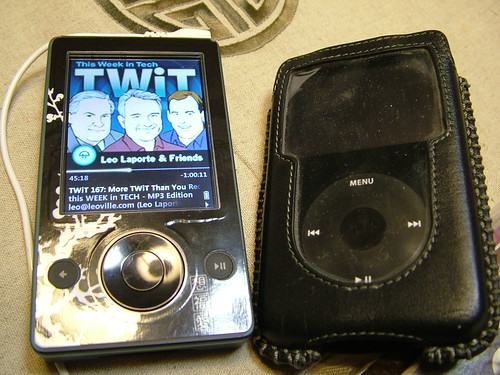 A good portable music player is one, which not only has good looks but also has to have quite a lot of extra features such as an excellent software backup, top notch high speed video playback, a good pod-cast support, a graphical user interface that can make you drool over it. Above all is the sound that matters and now a very trend feature that has come in is the Wi-Fi.

Considering the above factors both the music players don’t have all the above features and the iPod in comparison wins hands down. The Zune doesn’t work with any windows software and works with its only own software, which has just been released, which means all the kinks, are yet to be solved.

READ:   What to Do When Your iPod Crashes

The Zune comes in only one size and shape in comparison to the iPod which has many variants in different shapes and sizes.

If you are about to buy a music player and have gone through this article then you can decide on your own as to what do you have to buy. One last question is that I would like ask is that how many of you have come across a Zune in someone’s hand in comparison to an iPod. The answer would be next to negligible.