Skip to content
Homepage / Apple News / Which iPod to Buy?


The very impressive and sleek music player form Apple has been dominating the music player market since it was launched. And Apple keeps on adding features to their wonder gadget, while maintaining the sleek and stylish look.

Planning to buy an iPod and confused as to what to buy. With so many options in the market it is surely difficult to choose. So many variants are there in the market that one finds it confusing. First let us look at the different models of iPod’s available in the market and what exciting features do they have –

• The iPod Shuffle – The cheapest of all the variants of the iPod. The new variant is as small as a key. This amazing device can store up to 4GB of data, which is equivalent to 1000 songs and that too in such a small size. The new iPod shuffle though is a lot better than its old variant. The new variant has the facility of a voiceover, which is a useful utility since there is no screen, but this helps you by announcing the playlist and also the music that is playing. Also the controls are located on the chord of the ear bud rather than on the iPod. This variant is best when you want to gift it to someone. Also recommended for joggers and people who are into sports. No taking your eyes to the iPod just fiddle with the controls and get going.

• The iPod Nano – The Nano has been modified a lot ever since it was launched. For those of you who don’t know at first the nano did not have a screen and it wasn’t capable of playing videos. But the newer version of the Nano is also shorter and wider and is also capable of playing videos but the disk space is the same. So watching full-length movies on a nano is not such a good idea. If you are looking just for a music player that is attractive and capable of playing short videos then this is the best buy. The famous click wheel is also present in all the versions of the nano. It is available in 4GB as well as the 8GB variant. Also another variant of the nano is the nano ultra slim, which comes with a disk space of 2GB.

• The iPod Classic – As the name suggests this version of the iPod is the oldest, with just little modifications to it’s styling, the size is still the same. But what is astonishing is that for a little extra you get disk space of 80 and 160 GB. This iPod is capable of playing video, and watching full-length movies on this is one of a kind experience. 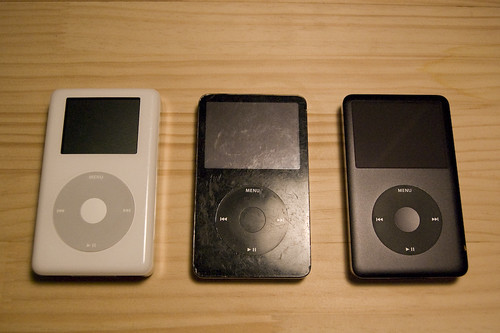 • The iPod Touch – The latest among the iPod family, and the trendiest and the sleekest. With a large display of 3.5”, which is also touch screen, this iPod supports the wide screen format of watching movies. It also boasts of the QWERTY keyboard. Also this iPod supports application that run on the iPhone, which have to be transferred through Wi-Fi Connection. The only drawback is that this iPod is available with a disk space of just 8 and 16 GB.

After reading the above, on can easily jump to the conclusion that the best value for your money is the iPod Classic while if you want everyone to envy you then you can go in for an iPod Touch.