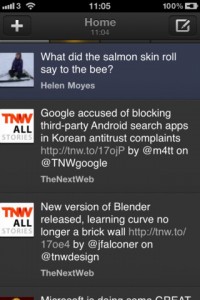 Tweetdeck is one of the many free Twitter apps for the iPod Touch and iPhone device and it is also one that has been around the longest. Tweetdeck is a really great application as the app is actually available on other devices such as your desktop PC too, allowing you to keep all of your accounts in sync across your devices.

The app is very well designed and can either be used with the light or dark colour themes depending on your preferences. It is also possible to add multiple twitter accounts to the application which makes posting tweets across a number of accounts easier than ever. One of the cool things about this app is that you can add your own custom feeds such as feeds for direct messages, and other things. This will allow you to really keep track of the parts of the Twitter accounts that you manage that you really want to.

READ:   Do You Know that You Can install Fortnite for iPhone and iPad?

A cool thing as well is that you are able to add your Facebook accounts to the app. This makes managing your entire social media profile easy as you will only need the one app; Tweetdeck. There is support for posting photos and videos as well as a variety of other forms of media within the app which allows you to post rich media updates to your fans. The app is very intuitive too and uses the touch screen interface to allow you to switch between feeds with ease. This is by far one of the best Twitter apps out there.

You can download the app from iTunes here: http://itunes.apple.com/gb/app/tweetdeck/id429654148?mt=8