Wordology Lite is a short free application for the Iphone and Ipod Touch. It’s very similar in idea to scrabble or the newer version that came out after called Upwords. The program has a great introduction and instead of throwing you into the game without any idea of what you’re doing, it gives you instructions right as it opens. The downfall to this is as far as I’ve been able to tell they come up each and every time that you open the program. As it is a very limited trial edition of the game, my guess is if you like it enough to play it over and over again that you’ll most likely purchase the full version from the application store.

Read: How to Play Wordle on iPhone 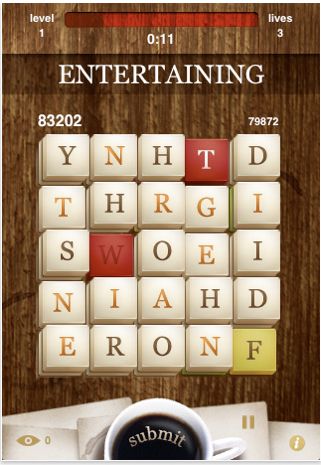 Unlike Scrabble or Upwords instead of having the tiles in front of you where you would have to create words on the board the board is already setup with tiles stacked on one another. Each tile in Wordology Game app for iPhone has a letter and you’re to select each letter whether they’re touching or across the board from one another. Your goal is to spell out words while gaining more points for longer words. There are also extra tiles that have differing colors that offer different things. Some offer bonus points while others may speed up your timer. Each words that you type, no matter the length, gives you an extra thirty seconds to find the next word. As tiles are used they disappear revealing those tiles underneath. To level up all but a certain number of tiles must be used. Wordology also gives bonus points if you’re to use every tile on the game board. Lives are also taken away if you spell words incorrectly.

Author with several years of experience in technology