Word Warp is a letter scramble game on the Iphone or Ipod Touch. There was no introduction to the game or explanation as to what to do. It is a very simple game and was easy to figure out, but the user is thrown into the game immediately with some ambiguous buttons at the bottom of the screen and a start button. Once the game starts some nonsense letters are in front of you with a bunch of dashes at the top of the screen with the buttons at the bottom that say Warp, Last, and Got It. 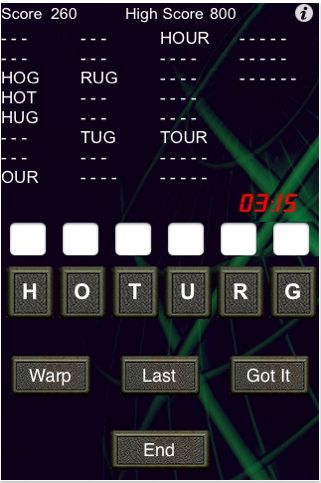 You’re given two minutes to create as many words as you can from the six letters that are given in this word warp game for iPhone or ipod Touch. These words can range anywhere in size from three letters to six letters. The dashes at the top of the screen turn into words that are correct. So at least from the beginning you are aware of roughly how many words can be created from the given six and also how many of each length of word. The Warp button on the bottom gives you a new perspective on the given letters are they are jumbled up again to hopefully give you new insight. Last repeats the last word that you input and finally Got It is how you submit each new word that you type. You are given two minutes to enter as many words as you can. You are not punished for entering anything that turns out to not be a word.

See also  Pandorum - Game Based on the Movie

As with most of the create a word or jumble iPhone applications a lot of the words are so short and unheard of that they are hard to come up with. Having the dashes at the top of the screen to help show you how many you have to find really help combat that issue. Overall it was a fun puzzle game to play.