Playing the Despicable Me Minion Mania Game App on IPhone. Many people enjoy the despicable me gain game application that is available for most iPhone. This is a very simplistic iphone game that countless people enjoy because they are able to take out their frustrations with their day through the game. The game is based on the movie of the exact same name. The despicable mean game model is spread out over 20 levels, where players are charged with getting a minion out of the maze that has been set before them in the given level.

Many users find despicable me to be a very addictive game because they want to solve each puzzle like level as quickly as possible. There is a tutorial explaining how to control your minion. A person only needs to tap where they want the minion to go on the screen in order to get the desired reaction from the cartoon character. The user will have to become successful at picking up weapons along the way in order to destroy obstacles throughout the maze. Despicable me has many different weapons to choose from as well as a wide variety of obstacles especially during the harder levels

READ:   Dungeon Quest for the iPhone

The controls in Despicable Me: Minion Mania iphone game are relatively simplistic one touch of the screen will activate the weapon. Another touch of the screen to fire the weapon and another to release it. The simple controls make it easy for even the most confused player to be successful in the game. There is a great deal of strategy in order to be successful in the despicable me game world. If the various creatures under control do not work together, certain levels cannot be completed successfully That obviously the early levels are relatively simple whereas more advanced levels will become complicated and require more strategy. 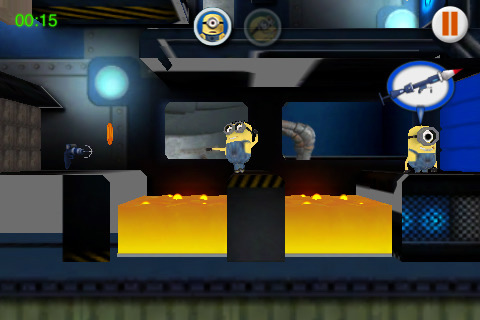 Individuals are not patient when playing a game such as this will become frustrated very quickly. People that are more logical with their video game play will enjoy this game and quickly master all 20 levels. Many people wish that there were more levels to the game because once they have beaten it there is no challenge remaining they become frustrated. This is not to say that the average person will immediately get through the game without any trouble. The despicable me world is very challenging until a person gets used to the gameplay.

Another factor that is difficult in the game is mastering the timing necessary to execute each level solution. Just because you know the solution does not mean that you will be able to time things properly so that you can advance to the next level. The game is extremely challenging and can provide hours of fun for most users.

Some people appreciate the fact that the sound in the game is not repetitive in nature. Many players will find themselves on the way with the repetitive nature of needing to redo tasks when they have failed to pass a certain level. Some individuals find the controls to be confusing because the camera and the character is moved with the same basic principle. Therefore it is entirely possible to move the camera went intending to move the character.