Skip to content
Homepage / iPhone Tips / iPhone Applications / How to Return an App You have Bought from the AppStore?


How to Return an App You have Bought from the AppStore? – AppleRepo.com, The number of applications in the AppStore has done nothing but grow and grow from that in 2008 Apple made available to developers and users the digital single market that can buy and get applications to all users of iOS and OS X, model which it has been copied by all its competitors.

Although the average quality of ipad and iphone applications is much higher in the AppStore comapred to other markets like Google Play or Microsoft Store, largely due to the review process that Apple submitted all itunes applications, you probably also occasionally when we buy an ios application that does not meet your expectations or does not do what it promises. So now you want to return an application or any digital purchase from the iTunes Store, iBooks Store or AppStore

In December 2014 the European Union made a number of changes to protect the rights of consumers in the digital world by which we are entitled to 14-day period in which we can return any app, book, song or movie purchased from any of Apple digital stores.

The iPhone Apps claims process is very simple and is described as follows: 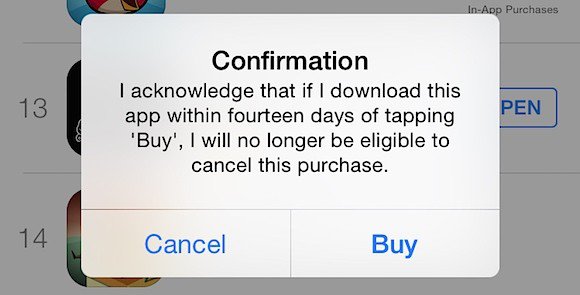 READ:   myAT&T App for the iPhone