Home » Getting in the Cycle with the Cycling iPod Touch Application

With the popularity of the Tour de France and other cycling races, it is no surprise that the cycling 2010 application for iPod Touch is extremely popular. The application costs less than a dollar and cycling 2010 allows individuals to follow all the important information regarding the race from the various stop points along the trail. This is a must-have application for any cycling enthusiast who is serious about having the best information about the race that is available on the market. 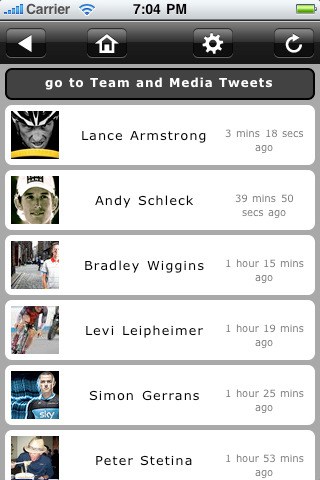 The cycling 2010 application post results almost instantaneously about two of the most important races in the cycling year. Both of the races take place in July, so this is indeed a very seasonal application. Results can be sorted by team specific members or by country. This gives users on the cycling 2010 application various options on how to follow the races in the way that is most appealing to them This application can be integrated with a variety of social networking websites which is an improvement over previous years. Users of twitter can consolidate all cyclists updates into a single feed. This is extremely beneficial for individuals that want to keep up with what is going on in the minds of the competitors without getting bombarded with updates.

Other great features of this ipod touch application include not needing eight footer account to be able to follow the informational updates. Media members also give their feelings regarding the latest updates. You do have to tap each name to see individual updates however still being able to keep all the information in one location is beneficial for diehard followers. There is a section in Cycling 2010 ipod touch app where people can predict the winner of the tour to France braced this is extremely enjoyable for people that want to debate who the best in the sport is at any given time.

READ  The BackGrounds App For The iPod Touch

Some users are not happy with the speed of the application itself. Considering the price of the application and the intensity of the program that is needed in order to the application to be successful, some lack in speed is to be expected. Sometimes the program structures funding altogether and needs to be relaunched. This is not something that the majority of users like to have to do however many people will make the concession because they want the updated information. Users need to have an iPhone or similar device that is running on an operating system of at least 3.0 or higher in order for the application to work. The application is available in multiple languages so that people from all over the world can follow the updates in their native language.

The individual that and SMS application will be sure to get their money’s worth even with the minor annoyances of having to tap repeatedly on the screen to get information and the extra loading time that is sometimes necessary. get this Cycling 2010 ipod touch app here.