DC Comics App for iPhone, iPod Touch and iPad. If you’re a comic lover, but just think it’s too much to have to haul around that pile of comics everywhere you go, then the DC Comic app for the iPod Touch is finally here to end all your troubles, even if it is a bit late in coming, seeing as how the Marvel app was released a year ago. But, we won’t argue about it. We’ll just download the app, and be happy that we now have all of our favorite DC comics on our iPod Touch.

Yes, the app will let you read DC comics app on your iPod Touch, the iPhone, or your iPad, but it does a lot more than that too. You can buy comics directly through the app, an exercise that will cost you anywhere from $1 to $3 but, one of the best features about this app is that it will let you know through a push notification that a new comic in the series you’re reading has just come out. And, while you’re browsing through the preview for the comic, all of the information is right there for you, including what the comic is about, how much it costs, and how you can buy it right from your device.

READ:   SportsTap for the iPod Touch 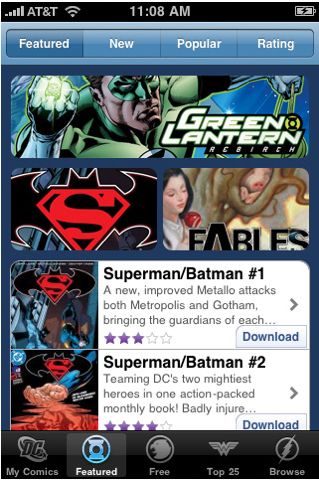 So if you’re trying to find a way to keep Superman, Batman, and the Green Lantern, then the DC comics iPhone app is something you have to download onto your iPhone! The app is free and you can download it here.

A mother who loves to write about iPhone, Mac, Ipad, Ipod Touch and even Android