Flick Bowling is a small-screen take on the popular sport where you and up to five others can play using a single iPod Touch. You’ll have to pass it around for other players to take a shot which is a bit of a hassle but it makes for a fun party game nonetheless. Sure beats having to stare into nothingness the next time you’re in the bus with friends.

You can move your players to their starting position by using your fingers as you’d probably expect. Aiming your shot uses the touchscreen display intuitively, which makes the action feel natural. To throw your ball in the lane, simply flick upwards. The flick will determine your shot’s velocity and direction so you better damn well keep it under control. It will take a while before you get the physics of how to throw a good shot but it’s pretty easy once you figure it out. 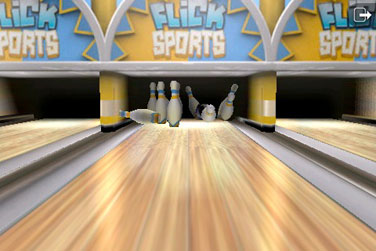 The bowling game for ipod adjusts the difficulty level by making the touch-enabled interface more sensitive. In the toughest setting, even flicking slightly off can take your ball down the gutter. Graphics for the bowling lanes and the animated objects are gorgeous although the characters do leave plenty of room for improvement. Perhaps the biggest fault for the current version of Flick Bowling is its lack of support for hooking the ball, a pretty standard move almost every proficient bowler does to nail a strike.

It’s not a bad game for $5, though. While it won’t leave you playing for hours on end (like the Moto Racer, for instance), it will prove a fun way to pass time with friends. Additionally, developer Freeverse promises to provide an upgrade with (at the least) the hooking motion included.