Every once and a while a game comes out on the iPhone and really revolutionizes a genre.

Tom Clancy’s H.A.W.X is one of those iPhone games. The game is based on the universe that Tom Clancy has created in his books. You will be playing as David Crenshaw a very elite pilot working for a private military contractor (think Blackwater in Iraq).

The Tom Clancy H.A.W.X game for ipod touch or iPhone takes you on a whirlwind tour of 13 missions, which are created to test you and push you to the limit, much like being a real fighter pilot would deal with in the air. Different missions including bombing missions, ground support missions, and protecting your allies are sure to provide different gameplay and exciting fun and variety (sometime games like this usually lack). 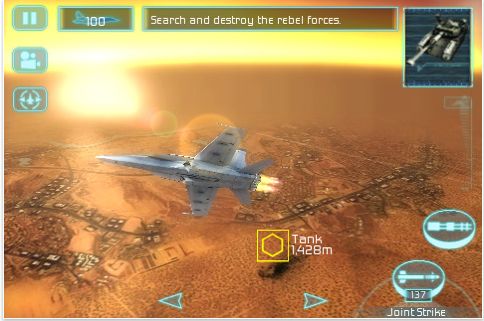 One of the coolest things about this H.A.W.X iPod Touch game is the ability to play multiplayer via wifi or Bluetooth against your friends. You can play two game modes with your friends, including deathmatch and team deathmatch, not much variety here but something overlooked way to often on iPhone games.

The game has ultra realistic graphics thanks to implementing real satellite images for scenery.

The gameplay on Tom Clancy’s H.A.W.X is amazing. The UI is flawless, allowing you to use either the accelerometer or a virtual joystick on screen. The UI also has very great elements including easy to use attack modes, and a great HUD that overlays information such as what your target is and what your mission is.

Being another Gameloft publication, the company that has had endless #1 App Store hits, this game is sure to be another one, especially with such a great name in front of it with Tom Clancy’s H.A.W.X, this game should have a great shelf life and tons of playability for months to come. It’s available now on the iTunes App Store for $6.99.

Check it Out this iPhone App Here (Paid) and the Free Version Here!