While your iPod Touch can do a lot of amazing things, it is still just a very compact device with limited amounts of resources.  As such, launching plenty of apps for multi-tasking – like we’ve been used to on a PC – isn’t really standard fare for iPod Touch users.

Packing only 128 MB of RAM (half of which is used by the OS) and no virtual memory options, launching an app more than capacity should see your iPod Touch crash in regular basis.  A good number commercial apps available from the Apple Store try their best to manage memory but many still 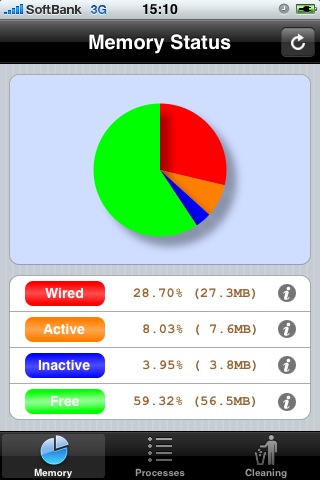 don’t bother.  As such, you’ll need to manage them  yourselves, which can prove a tad confusing, especially when you have several apps running in the background.

If you find yourself constantly running into memory issues with the apps you regularly run, you can use Kanako Honma’s 99 cent (recently marked down from $1.99) Memory Status for help.  More than displaying your memory’s status as the name implies, it list apps and processes currently taking valuable RAM, as well as options to remove them to free up space.