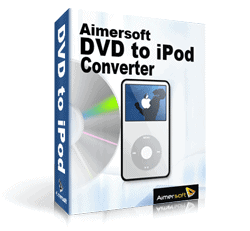 Though the mp4 technology had come into the market, it wasn’t so famous and well known over the world. But with the advent of the iPod the video version of it the format mp4 has become well known. Mp4 is that format which is supported by most of the portable players and also by the well known iPod.

Now users convert their movies into the mp4 format to store and view them on their respective players whenever they want at leisure. Users are often confused as to how to convert these videos for viewing on their iPod’s. The process is very simple and easy and one can easily convert them without any hassles.

The Digital Versatile Disk or the DVD, which has the capacity of 4.7GB stores videos in an encoded format, which is the .VOB format. If you open the contents of the DVD you will find two folders –

If one opens the VIDEO_TS folder there will be lots of files, but there will also be files with the extension .VOB, which is the format in which the DVD stores the video. In order to convert the video one has to copy these files onto the hard disk of the computer in any folder. The simple reason for this is that in case the software or the DVD gets hanged while the conversion is going on then there might be a problem, so to be on the safer side one has to copy the DVD video files on the computer.

Then after that the process is as simple as 1,2 and 3. One can open the converter installed on the computer. After the converter has opened then one can drag or import the video files into the software. After the files are imported then one has to select the output option as mp4. Other settings can also be changed such as the frame rate or the bit rate for the audio etc. After the files are converted which would obviously take time one can add it to their iPod. That too can be only done through Apples trademark software iTunes. After opening iTunes one has to add the files and then from the left hand pane, from the movies tab and drag the files on to the iPod, which will also be on the left hand, side pane.

One has to keep on mind that though the task is easy it is a time taking job and consumes up a lot of time, so when the conversion is large ie.movies then one should just add the files and leave it for conversion. A feature film may easily take up 40-50 minutes. The conversion also depends upon the priority of the converter. One has to keep in mind that all other programs must be closed so that the converter can take up most of the memory and convert at a very fast rate.

What is The Best iPod and iPhone Video Converter?

Now, a very versatile converter is one from the table of Aimersoft Studio’s, which provides cutting edge technology for trimming, cropping as well as converting video to other formats. This is one of the best Free DVD to iPod Converter i know in the market.

READ  Tricks to Play with in the iBooks App

The software from Aimersoft converts any of the video formats to any of the above. The software is a freeware and easily available on the Internet and can be downloaded from the link (Click the Image below to get 30 Days Free Trial of iPod Video Converter from Aimersoft):

After installing the dvd to ipod touch converter software above, the ADD tab has to be clicked and then the files are added to the list of the videos that have to be converted. Once the files have been added, then if one takes a look at the bottom there will be a drop-down menu under the heading of ‘Profile’, which is actually the output one wants to have. From there the output setting of the video is set. Bang below that will be the setting for the destination, which is the location where the converted file will be saved.

After these settings have been done then one can directly click ‘Start’ which would start the file conversion. This is the simple three-step method in which not much has been done to start converting dvd video to ipod format.

But in case of a complex dvd to ipod conversion where one has to customize the settings one can do so by setting the different parameters for Audio as well as Video. The settings button has to be clicked to open the settings’ window and set the video parameters (such as resolution, frame bite, encoder, and bit rate) or audio parameters (such as sample rate, channel, encoder and bit rate, etc. After this entire setting one can convert easily and view it on their iPod.

There are some other useful tips, which might help you in a better video conversion. Without the help of editing software, some useful functions can be used. The video in question can be cropped from sided to remove the black edges.

Also effects can be added that will enhance the video. Depending on your choice one can set the: brightness, contrast, saturation and adjust the volume etc. You can also choose the effect such as Emboss, Gray, negative, old film, or just no effect.

With the advancement of technology everything is possible which no one had even thought of before. Watching video on such a small screen was never thought of before and now it is in front for everyone to use and avail. Lying down with an iPod in hand and watching everything happening in a small screen is amazing and the best part is you can enjoy any movie that too anywhere, whether you are traveling, lying down, in a flight or even in a bathroom.

But that is only possible if one first converts the video with the help of various software’s available on the Internet and Aimersoft’s software is one of them. All in one package is a difficult find and Aimersoft’s DVD to iPod converter provides it. Copy, add, convert and enjoy.

One Reply to “Free DVD to iPod Converter from Aimersoft”