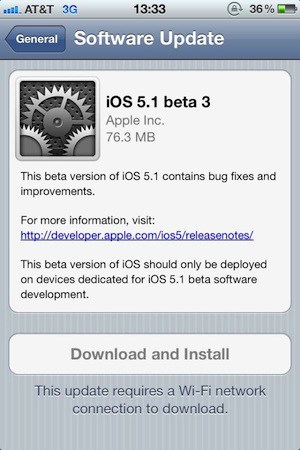 iOS 5.1 is the next big release from Apple and while we don’t know exactly what it will include or what kind of upgrades it has we do know that yet another beta has been released to developers around the world. iOS 5.1 beta 2 was released in December and now Apple has released iOS 5.1 beta 3 to developers.

The biggest changes we see in iOS 5.1 beta 3 include backup settings and controls that were not previously available in iOS 5. Developers are still in the early process of working with and testing iOS 5.1 beta 3 so there may still be a few changes that we haven’t seen yet. For now though it looks like iOS 5.1 is going to be a pretty significant upgrade so stay tunes for an official release announcement from Apple.