With the release of the iPhone 6, the iPhone 5s price has gone down into half its original price. You can now easily buy an iPhone 5 from various big retail chains like Walmart, Best Buy, Staples etc. A lot of these stores has cut this devices’ on –contract price, which is no doubt the best news for iDevice fans ever. What’s more to expect is that its price is getting cheaper and cheaper. At present, the cheapest iPhone available to buyers is the 8GB version of the iPhone 5c. This sale is by far your best bet if you’re wanting to buy a brand new iPhone 5 not only for yourself but for your children as well.


Thanks to price cuts of other handheld phones Apple has managed to keep the cost of the iPhone 5 down. This iDevice has proved to be an incredibly popular phone with some users. It comes with 4G too, so you’ll be able to get fast internet speeds, which for most people is just about the most important thing when it comes to a modern smartphone.

READ:   iPhone 4S is Unlockable Without any Changes

Though it’s a bit older now, iDevice users would still be pleased of the iPhone 5s price, it has now a very striking bargain for iUser’s than any other handheld device.

Possibly the only major disadvantage of the cheapest i5 – the i5C – is that it has no fingerprint scanner. If you want the Touch ID fingerprint sensor in your iDevice you need to get the iPhone 5S.
Launched in late 2013 was Apple’s plastic iPhone 5c, which was more affordable than the iPhone 5s. Apple will stop production of the iPhone 5c along with the iPhone 4S this 2015, with their suppliers soon to lower production for the handset. News last year states that winding down for the production would end after some certain promotional plans were over.

Are you interested in something new and cheaper iPhone? 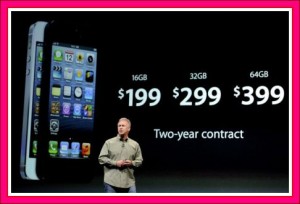 ZTE, a Chinese manufacturer has revealed its new device called the Nubia Z9, it looks just like the iPhone 5. This phone has been a talk on the internet for several months because of its “bezel-free” display. Other handheld manufacturers have been working to free up more display but ZTE has already achieved it.
Here are some of its promising features:
5.2-inch 1080p (1920 x 1080) 2.5D curved glass display
3GB of LPDDR4 RAM and
32 or 64GB of internal storage.
Qualcomm’s Snapdragon 810 64-bit octa-core processor
Adreno 430 GPU for graphics.
Camera has ZTE’s ‘NeoVision 5.1 interface’, – the company’s camera software.
both FDD-LTE and TD-LTE compatible.

Nubia Z9 even has the single home button below the screen just like the iPhone 5. I tell you, it just like an iPhone and it is cheap. That being said, there is one outstanding feature that really sets it apart from a cheap iPhone. ‘FIT’ short for ‘Fringe Interaction Technology‘. This tech has been the talk in the internet. Essentially, this will allow users to slide their fingers on the devices’ sides which also activates certain functions on the Nubia Z9. It also lets users to open certain apps, activate some shortcuts and set gestures to your personal taste.

Have you decided what to buy new iphone?

iPhone or not, but a cell phone is a cell phone. All smartphones now a days are great in giving us more independence. And this handheld device help us in today’s modern world. This smartphone programs and features are what makes a phone special. It is important to understand what purpose this device can offer you. So have you decided what to buy?