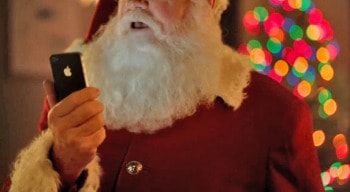 This holiday season Apple has decided to put out another clever and creative advertising campaign that is actually quite cool. In the new holiday ad, Santa is seen carrying an iPhone 4S and ever asking Siri for help. The amazing directions and weather capabilities of Siri are shown off as Santa asks for address information and weather around the country in order to help speed up his Christmas deliveries.

This advertisement has been making news since it came out and so far everyone seems to love it. This is yet again proof that Apple definitely has some of the best creative minds when it comes to marketing and advertisement. Hopefully Apple will continue putting out clever advertisements like this one to build more sales in the future on this and other popular devices.

joshcox
« Traveling with iPhone
Where to Find Free Music for iPod »