Skip to content
Homepage / ipad / iPad games / How Apple will revolutionize the education?


Although our technology has invaded every aspect of life, learn how students and pupils remained unchanged. They now do not peel or textbooks, notebooks and pens, something that Apple is going to change it radically. 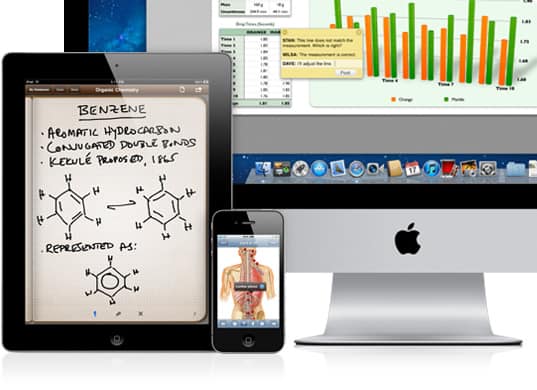 Apple plans to sell textbooks in his store, iBooks, directly from publishers, according to market sources quoted by Cnbc.com. The company plans to integrate sales and manuals with the courses currently offered through iTunes U, Apple’s educational portal. This portal provides schools and universities the opportunity to distribute educational plans, films and audiobooks laboratory sites using free software.

In the biography of Steve Jobs, newly published author Walter Isaacson writes that former head of Apple desperately wanted to change the textbooks industry. This view books as living documents, which include movies, live comments on the Internet and other interactive elements.

READ:   iPhone 6 Release Date: A Call Out To Gadget Lovers

If Apple will respect Jobs’s wishes, this could revolutionize not only how books are created, but also literary works.
Digitisation of educational materials is not a new concept in the publishing industry. This was one of the purposes of eReader release, such as Kindle, but it seems that the effect on students and student life was insignificant.

Here we have a list with a few applications:

Toca Robot Lab
It is a very simple, but that seems to provide unlimited entertainment.
Different parts of a robot fall toward the screen. First the head, then body, then legs and arms. Depends on the player to assemble robot parts, so then it can fly through a maze to collect some stars. And then so, because children do not seem to ever get bored of this game, which shows how important is repetition and experimentation for children who want to play and learn.

Cars 2
Disney applications are among the most innovative iPhone accessories that came out this year. This game involves placing plastic toy cars on iPhone, so you can interact with the virtual world of the game. The application can acquire free, and you can use even toy cars made ​​of paper.