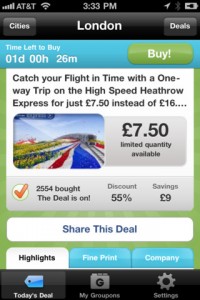 Groupon is one of the fastest growing companies that has ever existed and they now have an app that has been launched into the iTunes app store. This app will work on the iPod Touch as well as the iPhone and it will allow you to keep up to date with the daily deals that Groupon has. The app is extremely well designed and follows the Groupon branding well. It is intuitive to use too which is always a plus point.

You will easily be able to manage your subscriptions as well within the app, being able to change whether or not you get email alerts from Groupon rach day. This is really easy to change and can be done so with the click of a button. It is the same case for buying Groupon deals too which makes getting those daily deals as easy as it can possibly be.

You can download the app free of charge from the iTunes app store here: http://itunes.apple.com/gb/app/groupon/id352683833?mt=8

Elf Ur Face App Free for the iPod Touch