Now for all guitar lovers, the iPhone has a solution. Instead of carrying your guitar everywhere, you can now just use the iPhone Guitar Application developed by Shinya Kasatani as a Google Code Project. This iPhone application lets you turn your iPhone into a virtual guitar so that you can groove along with the songs on your iPhone.

The six strings of the guitar are shown on the screen and you can just start playing it like any normal guitar. The sound produced is just like that of any real life electric guitar. Although it isn’t a substitute for an actual guitar, but it does have a couple of neat features which will make you think twice about it. This guitar application for iphone lets you play six types of instruments, Acoustic Electric Guitar, Electric Guitar, Muted Guitar, Classical Guitar, Electric Bass and Ukulele. Several guitar effects such as Distortion, Chorus and Delay are also available. Other features such as automatic plucking, string bending, turning On/Off the Open Hammer and an option for left handed users makes it a pretty decent application.

What the guitar application for ipod touch and iphone shows on the screen is a set of six strings and a little place to strum at the bottom. While a number of preset tunings are available, you can also tune any string up to an octave in either direction. This allows the users of this application to work on any tuning they want. The surprise in this application was a complete Ukelele with the small string on top. Out of the three effects (Distortion, Chorus and Delay), two can be turned on at a time. 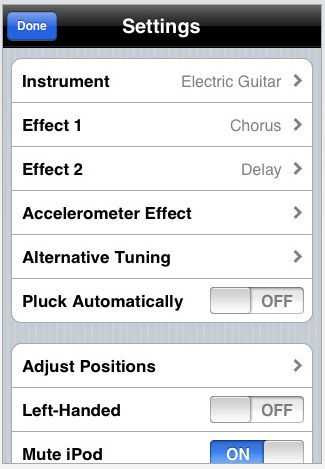 To sum it all up, the iPhone pocket guitar application is a steal at only $ 0.99 helping not only those who long to play the guitar, but helping those also who would just like to play a tune or two in fun. This application is seriously a must have for any musician.

You could buy this Great iPhone Music Application Here.