To use iTunes to rearrange the apps on the iPad or iPhone, first display the Home screen containing the icons to rearrange. Follow these steps:

1. Connect the iPad or iPhone to the computer.

2. If iTunes doesn’t launch or activate automatically when the computer detects the iPad or iPhone, launch or switch to iTunes manually. 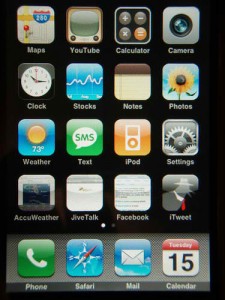 5. In the scrolling list of Home screens, click the Home screen that contains the icons you want to rearrange.

6. Make the changes you want, and then click the Apply button to apply them to the device.

To move an app to a new position on the same Home scree, click the app and drag it to where you want it to appear. The other apps move out of the way to make room for the app you’re moving.

Moving an App to a Different Home Screen

To move an app to a different Home screen, follow these steps:

1. Click the app and drag it to the list of Home screens and hold it over the Home screen to which you want to move it. iTunes displays that Home screen.

READ:   Don't Take So Long to Backup Your iPhone!