Apple is renowned for offering additional applications that can downloaded for the iPod and iPhone, and often they are happy to charge you for the chance to use them. But one thing they also do is offer a wide range of free programs through their iTunes App Store, over 600 hundred, in fact. One of the most frequently downloaded is the Crazy Penguin Catapult 2 free game App for the iPod Touch. 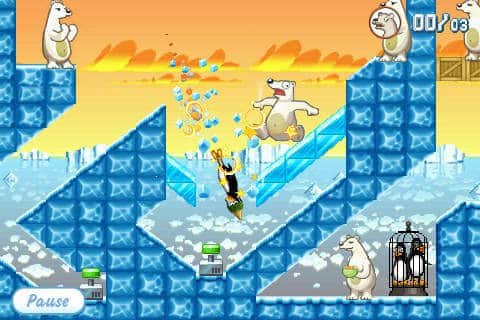 Now, the full version isn’t free, I have to admit, but you can get the Crazy Penguin Catapult 2 iphone app at no cost, which is a decent sized demo. You can play the first 6 levels, which is more then most free testers offer, and it’s a really addictive game. Even if you’re as cheap as I am, I would care to venture a bet that you will be buying it soon after trying it.

Crazy Penguin Catapult 2 is more or less about a population of penguins living happily and peacefully on the frozen shores of Antarctica. Their home is invaded by a horde of evil polar bears set on Arctic domination, and it’s up to our feathery friends to fight them off and save the day. Triumph over those fuzzy white beasts by launching the brave little penguins out of your giant catapult, and send them back to whatever hell (or floating ice block) they came from!


You can download the Crazy Penguin Catapult Lite app at the iTunes App Store here, where there are detailed instructions on how to put in on your ipad, iphone or iPod Touch, and having only been updated to Version: 1.0.14 on Jan 10, 2013, you can be the first of your friends to play it.

It’s a truly unique and fun game, and it’s already been given several of awards, including IGN’s Editors Choice Award, where it received an 8.5/10, which is high praise, when you consider how often the IGN editors find themselves unhappy with a feature of even the best games. The Crazy Penguin Catapult app for the iPod Touch is really one of the greatest out there, and if you don’t believe me, you should check out some of the other user reviews. I am not the only one quickly becoming obsessed with fighting off sub-zero bastards, and winning the war for the good of penguin kind.


So, if you are looking for a game that offers the challenge of a strategy game, the skill of a first person shooter, and the lightheartedness of a children’s Pixar movie, then you have to check out the Crazy Penguin Catapult 2 game app for the ipad, iphone, iPod Touch. With a fresh story line, sleek controls, better then average graphics, and addictive game play, this is one application that shows why the iPod and iPhone are quickly branching out to include themselves in the game platform market.

If this Penguin ipad game is anything to go by, they deserve the new title.

Get this Penguin game from itunes apps store here.