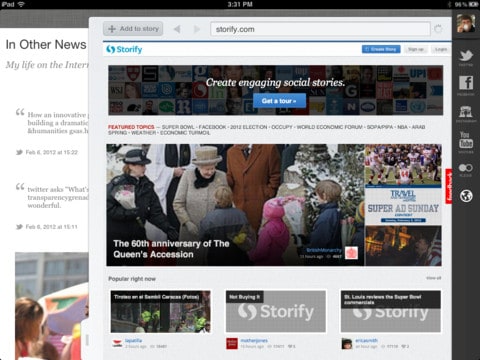 Storify: Telling Stories Easily On IPad – Since its introduction to the social media world, Storify has quickly catapulted itself to become one of the most popular tools for telling a story from content pulled from across the web. From independent users to major media powerhouses, the platform has become one of the go-to sites for quickly compiling information on situations and stories as they unfold. With its introduction to the iPad, Storify is now more accessible than ever, allowing anyone to easily share a story with those around in them with just a few simple clicks of their finger.

One of the major challenges Storify’s designers faced was the challenge of bringing a familiar web-based experience to the smaller, interactive screen of a tablet. The development team behind the application has managed to do so with flying colors, incorporating drag and drop capabilities and a seamless navigation system that make using the Storify app an altogether intuitive experience. Instead of fumbling through a difficult interface and learning how to use a complicated system, Storify instead makes it simple to share the stories users have on their minds.

While creating stories of their own is one of the major draws of this application, Storify is also created to allow other stories to be viewed at a moment’s notice. Users are presented with a list of available stories when the app is launched, allowing them to easily look through content that has been generated by other Storify users. The stories can in turn be consumed and modified as the user sees fit.

Working within the iPad’s Constraints

One of the great things about the Storify ipad app is that the developers have clearly focused on using the iPad’s strengths to build a quality product. For example, the Storify app only works in landscape mode. In practice, this means that valuable screen space can be utilized fully to make certain that the story created is both cohesive and logical. The app also takes advantage of iOS’s direct tweeting functionalities, allowing users to easily share content from Twitter with just a swift click of the finger. This makes using the Storify app even simpler than creating stories using the web-based editor.

Compatibility with Other Networks

Another great feature of this particular app is the ability to connect it with so many other networks. For example, users should be able to sign in to accounts on Instagram, Facebook and more, allowing this content to be included within their stories. Rather than using the desktop version of Storify to browse to these network’s sites, log in, and copy relevant information, everything is done with surprising efficiency within the iPad app. Login details can be stored to further streamline the process, allowing users to focus their attention and energy on developing a fantastic story to share.

Overall, the experience Storify provides to its users should stand as a real testament of the iPad’s ability to be used as a content creation device, rather than solely a pretty tool for consuming information. Storify has taken the best attributes of the service that so many already use on the web, transforming it into an iPad-ready system that can easily be utilized to share information and content on the go. Not only will experienced Storify users be certain to love having their favorite tool available to them in iPad format, but new content aggregators will find the interface easy to use and quite enjoyable. This makes the Storify app a true gem for iOS users to utilize.

rosari
« Apple iPhone 5 and the HTC 8X… Is There a Comparison?
The Best IPhone Apps For Job Hunting »